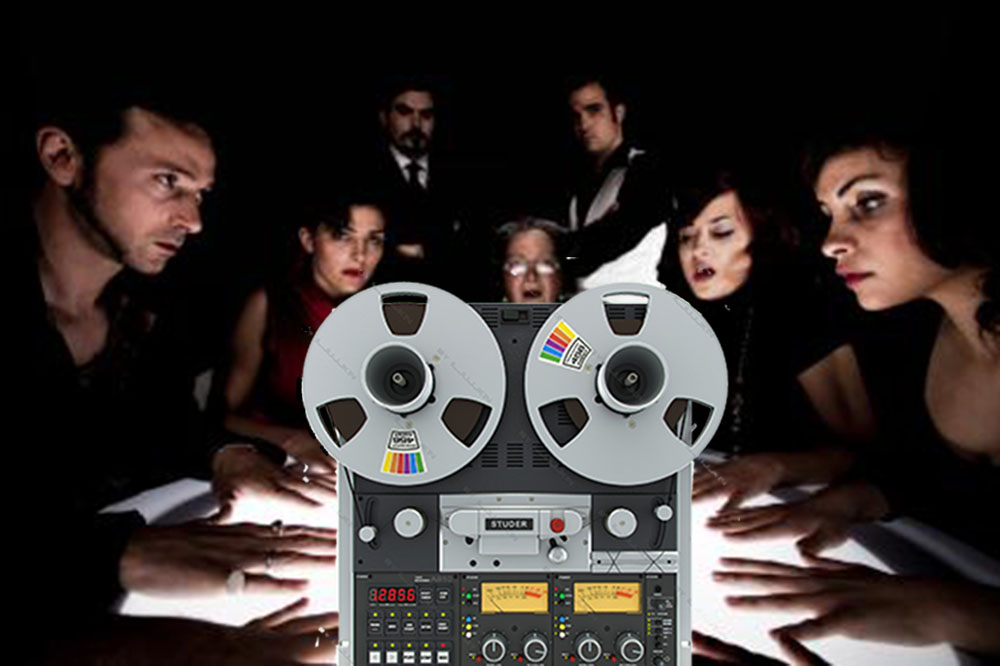 There are strange things done in the midnight sun
By the men who moil for sound;
The Arctic trails have their secret tales
That would freeze your blood right round;
The Northern Lights have seen queer sights,
But the queerest I address
Was that night John Diamond came to town
And blitzed the AES.

This, so help me, is a true story. I was there; I was sober; there were witnesses — hundreds of them. Chillun, gather round.

It was the heyday of the TranSisters collective, and we were deeply involved in occasional things trans and all things audio. So when the annual convention of the Audio Engineering Society came to San Jose, naturally we were eager to attend.

The AES was and is the organization of professional sound engineers. Virtually every audio engineer in the country belonged, so the annual international meetings were huge things, taking up convention centers, hotels, and so forth. I and my dear friend Arpana and others of the collective were having the time of our life, attending plenaries and breakouts and wandering the halls of hotels whose suites were packed with the latest microphones, amplifiers, loudspeakers and recorders, not to mention snacks, drinks and the occasional freebie.

Eventually we found ourselves in the main auditorium for the day’s plenaries, resting our feet and perusing the speakers’ schedule; and while we were thus engaged, an unfamiliar gentleman began his presentation. He was a bit more than middle-aged, grey-haired and a bit stocky, wearing a dark grey suit. He was a man of very few words.

“Good afternoon. My name is John Diamond. I am not an audio engineer. I am not a doctor. I am a kinesiologist, and have been for twenty years. I’m here merely to show you something I’ve observed in my practice. Make of it what you will. May I have a volunteer?”

That was the whole spiel. That was what started it. Arpana and I weren’t even paying much attention. By his own admission, the guy wasn’t involved with audio. Someone in the front row got up and walked onstage.

Diamond said “Stand here, facing the audience. Hold your right arm out parallel to the floor. I’m going to push down on it. You resist. That’s all.” Diamond signaled to an assistant, who played music through a small sound system.

Diamond said, “The music you hear is an analog recording. Now we’ll play a digital recording.” The assistant switched the machine off and turned on another one. The volunteer lowered his arm. Diamond said, “Don’t try to control it, just let it happen. Again, please.”

After a few repetitions of this, Diamond said “May I have a different volunteer?” Someone else stood up and walked onstage, and they did it again — the volunteer holding their arm out, Diamond pressing down, the assistant playing one piece of music and then another, the arm dropping. Soon it was clear that the volunteer wasn’t consciously dropping their arm when the digitally recorded music played; something else was going on, something involuntary.

By this time there were mutterings in the audience. Diamond stopped and walked to the stage apron. “I told you, I’m not an audio engineer. I’m not a doctor. I make no claims about what you see here. I’m just demonstrating something I observe in my practice. I’m asking you to tell me what it is. May I have another volunteer?”

This goes on for another volunteer or two. The presentation is the same: analog music, arm up; digital music, arm down. By now the audience is seething. Diamond just calmly continues. Now people are arguing. Some are raising their voices. Volunteers are swarming the stage. An elderly gentleman shouts “You’re turning our sober professional gathering into a circus!” (It may have been Sherman Fairchild.) Diamond is gesturing for calm, arms forward, palms out. I’ve never seen anything like this at an AES meeting.

Arpana and I catch each others’ eyes. Upstairs, we know, is the 3M suite, filled with the latest professional quality recording equipment, both analog and digital. We run, not walk, out of the auditorium, heading for the elevators, the clamor fading behind us. We elevate and dash into the 3M suite, complete with reps in blue serge suits in low-voiced discussion with studio owners. There is a classical selection playing on one of the mastering machines. I run over to it and press stop. Everyone turns around to look. Arpana says “Excuse us for just a second, we’d like to test something.” She beckons to one of the suits. “Would you mind holding out your arm?”

She shows him what to do. He holds his arm out parallel to the floor. She pushes down on it. He resists. She nods to me.

His arm goes down.

“What just happened?”, he says. “Never mind,” we say, “Thanks for helping.” And we run out of the suite.

Thirty years pass, and we live to tell the tale. You know, and we know, all music, when it’s reproduced, is analog. There are a million reasons why what I just told you couldn’t possibly happen, and I’m not here to discuss any of them. I just tell stories.

And that’s all I have to say about that.