Difficult reconciliations: Embracing the dream of my father during "Drive-by Theory",
a performance piece at the Gas Station Theatre during the Saint Norbert's Art Centre
conference The Multiple and Mutable Subject 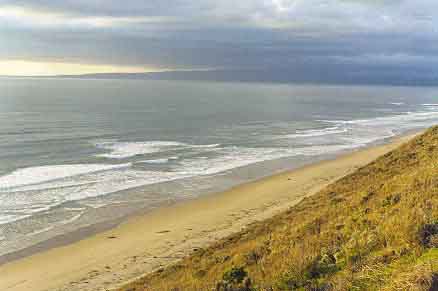 View from our dune overlooking Monterey Bay Marine Refuge, a/k/a The Front Yard.
Home at last...and time for a bit of rest, recreation, and reflection before the next adventure.
Here's a real-time view. 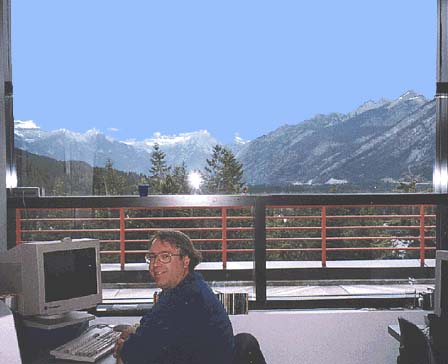 Summer fun...
View from my studio window at the Banff Centre for the Arts,
with Cynbe (Mr. Muq) ru Taren caressing the keys at one of the SGIs.
The BanffCam is that tiny rectangle to the extreme left of the window ledge.
On my plate for this summer are a storyboard for my screenplay of
The Seventh Seal, work on two books, and a new performance piece. 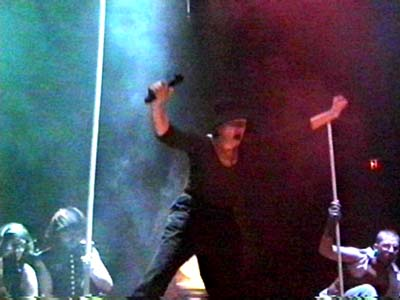 Heads up in the front row!
Yours Sincerely stagediving during Cyberdammerung, her performance ritual climaxing Apocalypso, the Banff Centre for the Arts' Interdisciplinary Thematic Residency on apocalypse narratives. A dedicated group of artists from the residency lent their talents to the piece, three of whom are visible in this pic.

Chance: Were You There? 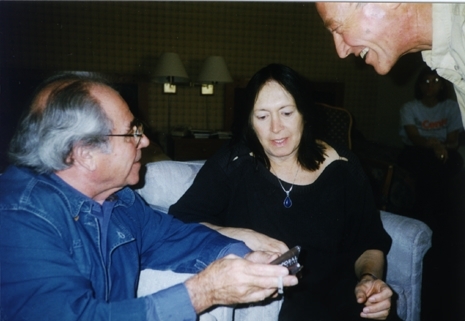 Wotta weekend!
Jean Baudrillard, Yours Sincerely, and interlocutor Sylvere Lotringer at
CHANCE: Three Days in the Desert with Baudrillard and Stone
Drive-by Theory pays off.


Like most virtual world researchers, I've always dreamed of the (near)perfect software for constructing engaging and flexible multiple user virtual environments. Muq may be it. But Muq is more than killer code -- it's an egalitarian philosophy of how code that's meant to create community ought to be written and distributed, and the consciousness such a philosophy implies.
More info here, or from Muq Headquarters, or the Protomuq Project.