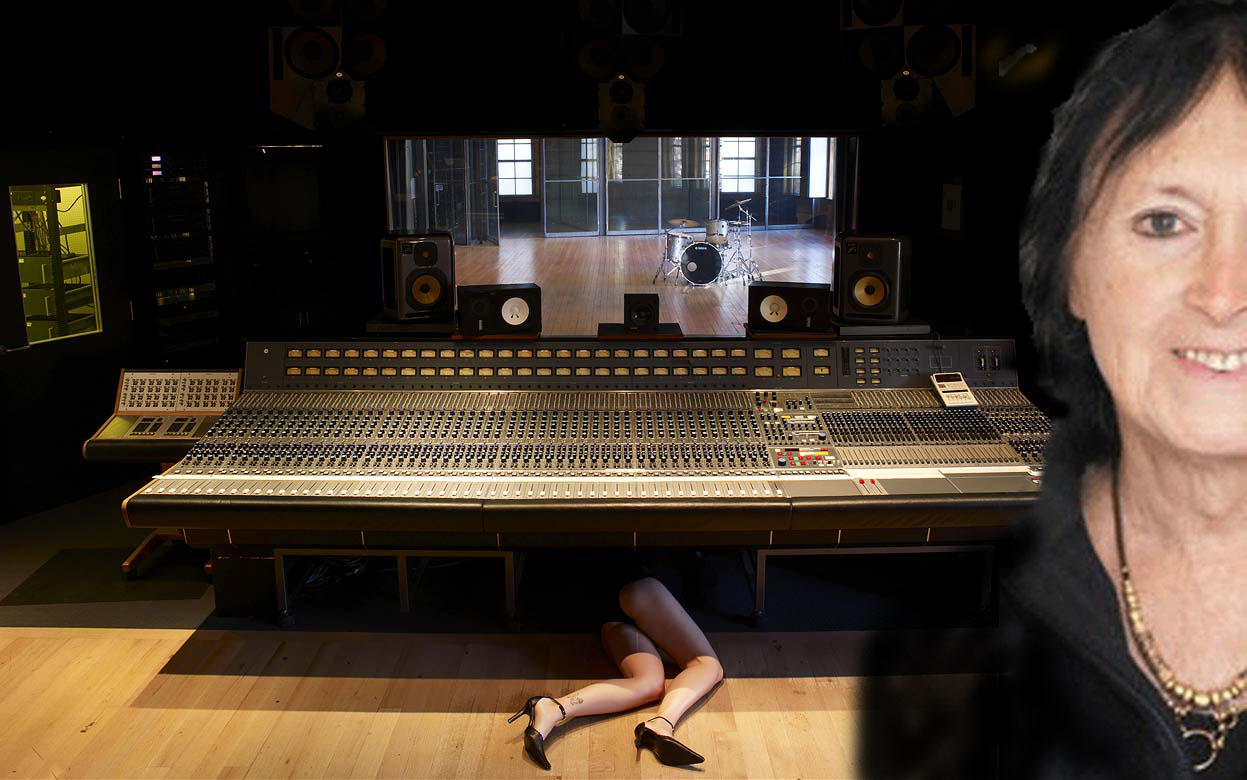 (Nota bene: The 24 track console I talk about in this post has passed on to its next life. The current console is a beautiful Soundtracs Jade 48, lovingly restored by Antonio Belena Lopez in Madrigueras, Spain and brilliantly maintained by Tim Jones, Soundtracs expert to the world, before being shipped to us here in Santa Cruz. The tale of its journey would take a few posts of their own.)

Y’all know I’m building a studio, right? (The image above is not the studio I’m building.) Well, this here’s an update. Almost all of the equipment is here and roughed into place. As the main audio chain pieces arrived, I lashed them together to make sure they worked, and they all did, which is all I wanted to know, so I turned them off again. Some of the toys (outboard gear in the analog realm) are placeholders, cheap versions of what I’ll add later, but they all work; I used Behringer equalizers and limiters until I decide on what will take their place. If it matters, I don’t know what my final choice for equalizers will be. It won’t be Pultec. I love Pultec but they’re useless in a production environment unless you’re using them for putting a finish polish on stuff during the mastering pass. I actually had two Pultecs in the chain in the mastering studio, but they’re much too gentle for studio use now in the face of jazzy stuff like digital parametric EQ.

For the limiters I’ll scrounge a couple of UREI 1176s, and thereby hangs a tale. After I left the industry, when I was fairly well along into transition but not at all sure what the future held in store, I went with Christy one evening to a John Stewart concert. (I loved John Stewart’s stuff, so sue me. “Now I have not been known/ as the saint of San Joaquin/ and I’d just as soon right now/ pull on over to the side of the road/ and show you what I mean”… Ooh, baby.) By my own choice I was out of the recording biz, but missing it powerfully, and I decided to bite a personal bullet, approach him after the show, and ask if I could record his next album.

When the show ended, John hung around in the front of house chatting and signing autographs. I waited until everyone else had said whatever they had to say and then introduced myself and made my pitch. John cocked his head and looked at me — and he sees not a hot-shit recording engineer radiating blue sparks but a thirty-something trans in a homegrown jeans skirt — and, gravely and quietly, he says “What’s the most common studio limiter?”

Everybody in the entire goddam sidereal universe knows the most common studio limiter is the UREI 1176. Chicago drug dealers know it. Australian aborigines know it. Tuvan throat singers know it. New Orleans street hustlers know it. And I know it. But when John Stewart asked and I opened my mouth to answer, without warning THE SHADOW fell on my mind — the phenomenon William Goldman wrote about in “Lord Of The Flies” — that weird, inexplicable moment when, for no apparent reason, and inevitably at the furthest extent of need, one’s brain goes blank and dark — and you stand there, living your worst nightmare, in front of the class with your pants around your knees and not knowing the answer to the mostest importantest question there is. “Oeheim, waz wirret dier?” I’m standing there with my mouth open, and nothing comes out.

John gives me about fifteen interminable seconds while my entire life passes before my eyes, and then, very softly and kindly, he says, “It’s a UREI 1176.”

All I can do is blush right down to the roots of my hair, mumble something vaguely apologetic, shuffle my feet…and walk away.

And that’s all I have to say about that.

Right now I have two completely different pairs of nearfield speakers, but eventually I intend to build enclosures for the four Altec 604Es and deploy them high up. I so miss the sound of Heider D. I so miss it. 604Es are what engineers sometimes call honky, i.e., they are peaky around 6-8KHz, depending on how your crossover works. This disappears if they are well damped, i.e., if the amplifier seems to present a very low resistance to the voice coil. (I said “seems” for a reason. I’ll come back to this phenomenon later.) We drove the Heider monitors with 80 watt McIntosh tube amplifiers, which provided good damping at a reasonable power level, but when they started to push, not only did they lose control of damping but their distortion rose precipitously. Tube amps produce even harmonic distortion, which, for psychoacoustic reasons, the human ear likes (aural exciters are all about this phenomenon); so with the Heider setup we were benefiting from the double whammy of peaky speakers and even harmonic distortion, which, taken together, sounded incredibly good. Yes, that’s right: the secret of Heider’s sound was that on some level it was lousy.

My most memorable experience of this was when I sat in on Steve Barncard’s Rowan Brothers sessions. (I may have been seconding Steve or just hanging out.) He was recording everything at 30ips, which burns a hell of a lot of tape, but Clive Davis was picking up the bill, so no one was particularly worried. (The Rowans slated “Take five for Clive” on one tune.) The combination of the natural jangle of strummed acoustic guitars, the extra depth and transparency of 30ips tape, the peakiness of the 604Es, and the even harmonic distortion of the tube amps was nothing short of staggering. On top of that, on the days when we were awash in interesting substances, with all the psychoacoustic magic flying around, during playback one could experience the sensation of having left one’s body and ascended to some hitherto unprecedented level of ecstasy. (Come to think of it, I had to have been observing, because no engineer would partake while at the board, and Steve never did. [I make special exception, of course, for the Dead, for whom the concept of altered consciousness meant something far beyond our poor power to imagine.] Steve Barncard was one of the most amazing engineers I had the pleasure of knowing, and, among other things, his diet was strictly organic and natural. More about Steve in a bit.)

The console accepts 24 inputs, but I expect to only need 16 for the foreseeable future. Actually I can get along with 8, because top quality preamps come in groups of 8. I have the Presonus Joey Lopez kindly sold me standing in for a bank of super-low-noise analog preamps which is on the way. Needing only 8: Once upon a time I was doing a project with David Crosby and Graham Nash during which a famous manufacturer of analog multitrack recorders asked me if we’d be willing to field test one of their spanking new 24 track machines. Those were quite rare at that time, and I jumped at the chance.

The next day the new machine arrived by truck outside our Hollywood studio, and everyone went outside to watch me wheel it in. As I bumped it over the threshold I ran into Bones Howe, who was working an Earth, Wind and Fire project in one of the other rooms. Bones, who had a nice wry sense of humor, asked me what was up, and I told him I was trying out a 24 track box. He looked down at the machine, gave me a perfectly guileless look and said “Whatever are you going to do with the other sixteen?”

Blada blada blada in the early analog days when giants walked the earth and so forth we did a lot of bouncedowns and combines to keep the total number of tracks down to eight, which, after all, was all we had. Bones was absolutely brilliant at this. Before that, it had been four. All of the Motown hits that sound so great are four track mixes. Don’t tell me you need thirty-six tracks for your great project. I laugh in your pumpkin spice latte, monkey-boy.

I’ll have more to say about bouncing, and also about that new gee-whiz multitrack machine, because it turned out to be a session destroyer in disguise. But that’s enough for now.